This is the realization of Mr. Nicanor Ripalda Raz, 48 years old, a beneficiary of Modified Conditional Cash Transfer for Homeless Street Families (MCCT-HSF) in Metro Manila who was registered in the program in August 2012.

Survival on the street

Nicanor, also called as “Nik Nik” shared their humiliating life on the street as sometimes, his family was accused either as robber or snatcher by the people passing by at Paso Dilao in Paco, Manila where they spent their almost eight (8) years street life.

After Nick’s quarrel with his brother in Calumpit, Bulacan in March 2006, where they originally live, he decided to bring his family to Metro Manila to stay out of trouble.

Then they went to their relatives in Metro Manila and requested temporary shelter where they can spend some days, until the time came that they no longer have a relative who is willing to share their house to them.

The main source of livelihood of Raz family is from popcorn vending which Nik untiringly sells in schools and churches during Sunday, with no bother in the skin-burning heat of the sun or even the cold plunge of drizzle or heavy rain during rainy season.

Nick shared that every night, he prays for their life to improve because he does not want his children to pass that kind of lifestyle to his grandchildren. He is aware that it is risky especially to his small children, yet, they cannot afford to rent/own a house and before, he does not consider the shelter as a major need.

Until in June 2012, a field office staff from DSWD interviewed Nik’s family and other street families dwelling in the same area which they occupy.

Changes brought by the program

From then, they became a potential beneficiary of the MCCT-HSF and eventually availed the assistance under the program as they religiously comply to its conditionalities.

Aside from the cash grants, the family also received assistance for the Alternative Family Homes (AFH) from November 2012 to May 2013 wherein they rent a house being subsided by the government for six (6) months in paying the rental. Today, however, they are proud that they maintain the payment by themselves.

Also, through the program, Nik was accessed to employment facilitation at Philippine Sundt Construction where he is a construction helper and earning P350/day.

To add some amount to their income, Nik continues to sell popcorn at night after taking rest from his day job in the construction. 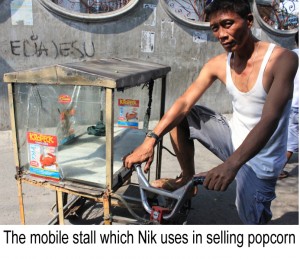 Also Nik promised to himself that as long as he lives, he will never let his family dwell on the street again. He assured himself that he will continue to apply to their lifestyle the learnings he acquired from the Family Development Sessions.

As can be gleaned from Nik’s family, they have found the new normal in their life… a life towards mending dignity and valuing the real necessity of a human being. ###   (DSWD FO-NCR, Social Marketing Office/ MTC/ April 15, 2014)