The said event was participated by different LGUs of National Capital Region, partner agencies and guests from Residential Care Facilities of the department. The activity aims to remind and teach the importance of law and the rights and responsibilities of the children in their community and the community to the children as well. 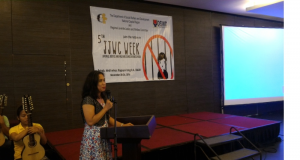 Ms. Glenda Derla, Social Welfare Officer IV of DSWD NCR said that with the rights of the children or the youth come their responsibilities. She also shared that during the celebration of National Children’s Month, they have discussed on how we can strengthen and implement the Juvenile Justice Welfare Act in response to the challenges that the children face in their lives. One of our challenges we are facing today is the legislation filed in Congress called House Bill 002 which aims to lower the minimum age of criminal responsibilities from 15 years old to 9 years old. That surely we do not want to happen and everyone will band together to empathically opposed to lowering the MACR.
She further added that according to Secretary Judy M. Taguiwalo, lowering the MACR is not a guarantee to lower the crime rate in our country because the population of adult committing a crime is still much greater than the children and youth. 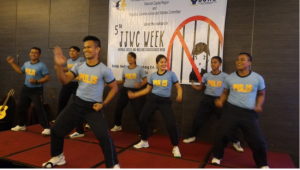 After the opening remarks, the NCRPO Fitness Team led a warm-up activity thru 5 minute dance exercise. 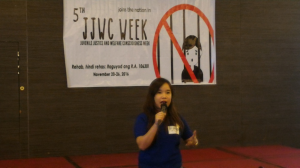 The session proper was started by Ms. Claire O. Toribio, Social Welfare Officer III of Regional Juvenile Justice and Welfare Committee National Capital Region who discussed the first session entitled, “Sesyon I: Malayang Talakayan Patungkol sa Panukalang Pagbaba ng Minimum Age of Criminal Responsibility (MACR)” which discusses the challenges and disadvantages of the said filed bill should become a law. The existing law of minimum age of criminal responsibility is fifteen (15) years old and the said amendment seeks to lower the MACR to nine (9) years old. The department opposes the House Bill 002 and does not consider it helpful to everyone especially to the children. Ms Claire encourages everybody to support the advocacy of the department by the youth of NCR. Many disadvantages could be experienced by the children if ever a nine-year old child be jailed and integrated with other adult inmate. They could adapt the character, habits and doings inside the jail and they could be much worse. Next is the psychological and behavioral effect of it to the children. According to our monitoring basis, they could be physically, psychologically and sexually abused inside the premises. And lastly, it will be costly for the governmentbecause it is much expensive to construct a Bahay Pag-asa because approximately P20 million should be the budget for it for every LGU in a region. United Nations Convention on the Rights of the Child (UN-CRC) commented to the Philippines that if we have established the MACR of fifteen years old, it should be progressive instead of lowering it. The Philippines is one of the state parties of UN-CRC. Thus, we are committed to protect the children from any form of abuse. 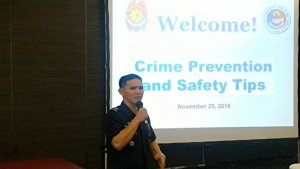 The next session was discussed by PSUPT. Denver A. Alidao, Assistant Chief, Community Assistance Development Division, Philippine National Police entitled: “Sesyon II: Pagtalakay sa Crime Prevention at Public Safety”.
The community and police should always together. Peace and order is a shared responsibility of both the police and the community. Without the community, the PNP cannot establish a success implementation of our law. The help of the children and the youth by relaying important information and abiding by the law is a huge contribution to our department. The crime has three elements: (1) Motive, (2) Capability and (3) Opportunity. These three elements should be avoided by the children so that they could not commit a crime. Likewise, the adults should guide and teach them the consequences of abiding by the law.

The third session is a puppet show performed by Mr. Samuel Fuentes and his team which tackle the proper ways on how to avoid commission of the crime and prevention of drugs. The puppets represent a policeman, child, Totoy Tulak, Boy Bangag and real-life personalities, Tsip Bato and 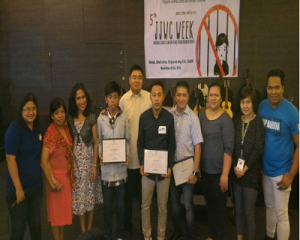 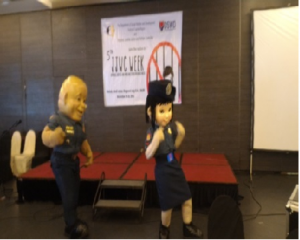 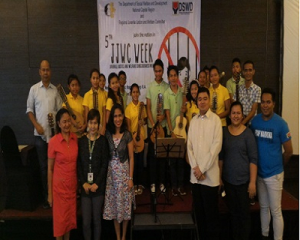 President Duterte. The show aims to prevent and encourage the children neither to commence nor to taste the illegal drug. on case someone tried to convince them to do it, always keep in mind their advocacy theme “Huwag, Ayoko, Hindi pwede, Masama yan!” This simple message is a tremendous help to avoid using illegal drugs that may cause committing a crime.

The second part of the activity which is the sharing of success stories by Mr. Joel Pangilinan, Social Welfare Officer III of Haven for Children; Mr. Gary Cañete, staff of CSWDO Las Piñas and Mr. RenmarPedroso, client of KnK Philippines.

The activity has successfully raised awareness of and provided relevant knowledge to the participants and guests. DSWD NCR, together with RJJWC will continue to be passionate advocated of the rights of children and to oppose to anything that may harm them. ###